Like your stereotypical farmer we have an old, trusty, rusty pickup truck. It has almost as many patches as original metal. The doors don’t close right, the driver’s seat has a vice grip where the adjustment handle is supposed to be, the windshield leaks, and the four wheel drive hasn’t worked in years. Let’s focus on it’s more important traits: it runs, it’s all paid off, and it’s been pretty cheap to keep on the road. Especially since Scotty is the world’s best homestead mechanic. 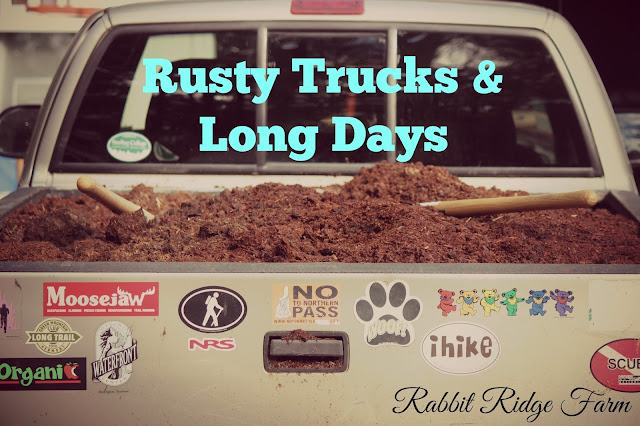 You know those patches I mentioned? They’re all made of scrap we’ve found around the farm. One patch is even made from an old realestate sign and they’ve all been put on without a welder. Part of what keeps our truck on the road without any major expenses is Scott’s ingenuity and skill.

All this work doesn’t always go smoothly though. Most recently Scott had to replace a rusted out fuel line. While working on this some fuel dripped out and to avoid getting it in his eyes Scott turned his head to the side. Unfortunately this got gasoline in his ear.

Thankfully we knew enough to immediately flush it out with warm water. He was in so much pain we wondered if he needed to be taken to the ER. A quick Google search revealed that this is fairly common occurrence and that people who were taken to the ER just had their ear flushed, given ibuprofen, and sent home. We also read that despite the ibuprofen the ear typically stayed swollen for several days.

So we gave Scott ibuprofen and waited. Most of the pain subsided but his ear was swollen shut. I decided to dip some Q-tips in ice water and freeze them so that Scott could ice his ear. Amazingly they worked super well. He held it against his ear for a minute and the swelling went down enough in just a couple of minutes to put a Q-tip in his ear for a few minutes. By the next day his ear felt fine.

Just another day on the farm I guess. I am continually amazed the occurrences that we now consider normal. Not just bad things though. It’s now normal for us to eat homemade bread, work on old cars, spend all day in the garden, and figure out how to make things we need instead of buying them. To some people it’s kind of weird but we love it.

Also if you’re a farmer or homesteader please remember the importance of basic first aid skills!