That’s exactly what I made yesterday at the farmer’s market, $24 and a rabbit. We showed up for the market a few minutes late and were startled to see no other vendors set up. In a panic that I had the wrong day we spoke to one of the Tractor Supply employees who informed us that though the market was on, but the woman who normally runs it had broken her hip recently and was unable to attend. He also said that they hadn’t had time to put up the signs advertising for the market. To top it all off I forgot my camera so there are no pictures of our awesome stand set up.

We were on our own the entire time but we hung our own signs in the Walmart Parking lot and made out alright. We sold radishes, carrots, zucchini, bread, one cucumber, and snap peas. Some of which was bought by a couple my dad met on one of his Craigslist excursions who had checked out our website!

Now what I know everyone who just read through that is dying to hear about, the rabbit. Late in the sale a truck pulled up and rolled down their window. They asked if we rescued rabbits because our name is Rabbit Ridge Farm. Not knowing what to say I answered, “sometimes.” Then the woman in the passenger seat explained that they had found a rabbit who obviously used to be someone’s pet out by itself. Rabbits are frequently “set free” by misinformed owners who no longer want or have the means to care for the animal and think they can survive in the wild.

She told us that it’s friendly and easy to pick up but they just don’t have the time to give it the attention it deserves and they don’t own any other rabbits so it’s lonely. They’re going to call us and arrange a time to drop it off. They believe its a girl and they call her Savon. She’s large and gray and hopefully going to be a great friend for our little Milo!

For those of you who don’t know Milo he’s 12 years old but still full of spunk. He’s an indoor rabbit in the winter and spends most days in the summer out in a run (when we’re home). His favorite things are wandering down the hall when I’m not paying attention, radish greens, raisins, fresh fruit, and making me chase him around the run before bringing him in for the night. Milo (brown spots) is pictured above with Lilly his companion who passed away of cancer almost a year ago.

The new rabbit’s a boy and he’s awesome! We didn’t want to change up his name too much but Savon just didn’t seem to fit so we call him Vonsey. Isn’t he adorable? 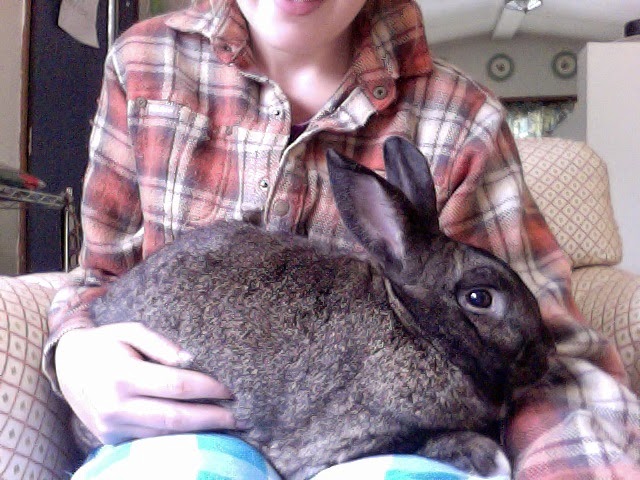